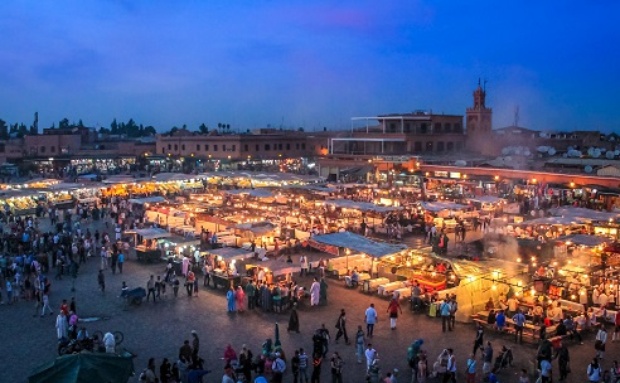 There are a number of must-see destinations in this fascinating country and the best place to start is Casablanca. This is a city for travellers who like to feel like a local, rather than a tourist, and who want to experience the present as well as learn about the past. Though not as atmospheric as other Moroccan cities, Casablanca is the best representation of the modern nation. To a romantic, Casablanca is a mythical place that exists in a dream inspired by the 1942 film starring Ingrid Bergman and Humphrey Bogart.  In reality this is where money is being made, where young Moroccans come to seek their fortunes and where business is thriving.

An extraordinary journey made up of moments frozen in time. This is Fez. The spiritual heart of Morocco, it is the most complete medieval city in the Arab world. A visit here will see you exploring labyrinthine streets concealing ancient souks and iconic monuments, none more so than the exquisitely decorated Medersa Bou Inania. The most elaborate, extravagant and beautiful of all Merenid monuments, every room has beautifully sculpted ceilings and carved cedar beams as well as elegant marble floors. All the walls have been covered by handcrafted stuccos and even the spaces between columns have been decorated in this magnificently delicate art form. In addition, the medersa is the city’s only building still in religious use that non-Muslims are permitted to enter.

Set somewhat apart from the other medersas of Fez, the Bou Inania was the last and grandest built by a Merenid sultan, completed in 1357. It shares its name with the one in Meknes, which was completed (though not initiated) by the same patron, Sultan Abou Inan, but the Fez version is infinitely more splendid. Its cost alone was legendary – Abou Inan is said to have thrown the accounts into the river on its completion because “a thing of beauty is beyond reckoning”.

Travelling to western Morocco, there is so much to discover in the colourful chaos that is Marrakesh! Journey through narrow streets lined with fruit stalls, mounds of spices, intricately woven Berber carpets, leatherworks and ceramics. In the Djemaa el-Fna square, known by locals as “the heart of the city”, keen street-vendors, charismatic snake-charmers, street musicians performing lively songs, and flocks of tourists add to this magical assault on the senses.

The Sahara is the world's largest desert and stretches across much of North Africa covering over 9,000,000 square kilometers (roughly the size of the United States). No visit to Morocco is complete without spending a night here. The quietude and space of the Sahara is indescribable, the night-sky boundless (skies so crisp and clear that the stars seem close enough to touch) and the desert scenery otherworldly. A sunrise camel ride over its rolling dunes will probably be imprinted in your memory forever!

Live the Journey can assist you with incredible journeys of discovery to Morocco. Venture into this fabled land of myths and legends where a surprise lingers around every corner!